That’s why Hayden Sprigg and his family opted to sow 1800ha of InterGrain’s quick maturing wheat Vixen this season as a key component of their 5500ha wheat program north of Mukinbudin.

With 2022 kicking off with decent opening rains and promising price expectations, canola rotation planting was upped to 1800ha, followed by 1000ha of InterGrain barleys Spartacus CL , Maximus CL and Litmus and 5500ha of wheat. The balance of the 9000ha was sown to oats for grazing and grain, plus vetch as a pasture legume.

“As wheat covers more than half our cropping program, we look for diversity when making our variety selection, particularly when it comes to maturity,” Hayden said.

“Hence last year we bulked up a tonne of Vixen seed, which gave us 110 tonnes of seed back for this season after cleaning.

“Sown at 22 kilograms per hectare in a 40ha  block, it was our highest yielding variety, despite being frosted on the main stem.”

Hayden is confident Vixen will meet all challenges this year across a range of soil types, including a reasonable area of heavy soils which favours such an AH variety.

“In this area, our seasons can be cut short, so one of our biggest challenges is getting varieties to finish before terminal drought hits,” Hayden said.

“The combination of positive Vixen yield reports from neighbours and reviewing NVT data means we could confidently sow Vixen as a quick maturing variety after our mid maturing lines.

“In the past, quicker maturing lines weren’t yield competitive with main season varieties such as Scepter , but so far it’s been a good move” Hayden said.

“I’m looking forward to seeing how Vixen performs this season in what’s shaping up as a very different season to 2021.” 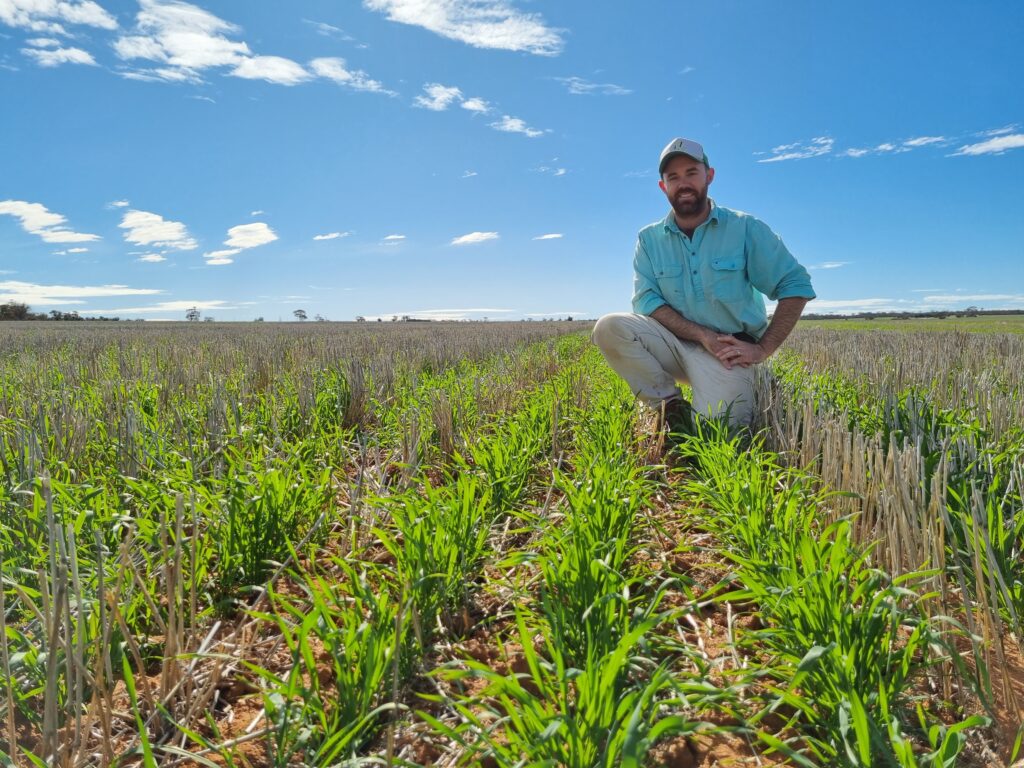 Hayden Sprigg, Mukinbudin grower in his cracking Vixen crop on the 8th July 2022.

The Sprigg’s wheat program consists of 2000ha of InterGrain’s ANW Ninja sown at the start of May, 1800ha of AH Scepter sown in middle of May, followed by 1800ha of AH(N) Vixen .

Additionally, 40ha of InterGrain’s Rockstar wheat (AHN) was sown as a bulk up block for possible use as an earlier sowing option in 2023.

“Vixen has continued its streak as a stellar performer, as the highest yielding wheat on average based on long-term 2017-21 WA NVT data, highlighting Vixen’s capacity to perform across a range of seasons, Dr Mullan said.

Vixen is available through WA Seedclub Members and is a farmer-to-farmer trade approved variety.

For more info & to RSVP, get in touch with
@mattynaum