InterGrain’s RockStar wheat is set to be the headline act for Bool Lagoon grower Bruce McLean in his 2022 wheat program following a rocking finish to his bulk-up crop in 2021.

Wheat is an integral part of the cropping rotation at the McLean 3800 hectare program in South Australia’s South-East, following the delivery of consistently strong gross margins over the years.

This season half of their cropping area is planned for wheat, with the remainder sown to canola, faba beans and persian clover. Given their wheat focus and the yield potentials on offer in the limestone coast’s high rainfall cropping zone, variety selection is critical.

Last season Bruce was very impressed with how 54ha of RockStar performed in a season which began with a standard break followed by a very wet winter. Good spring rains rounded what was a very strong season.

“RockStar yielded exceptionally well, averaging 9.06t/ha and had we received one last rain event in November, I’m sure it would have cracked 10t/ha as it had the head numbers to do it” Bruce said.

“The top end yield from a spring wheat was very surprising. It just kept falling in the header box and it all achieved H2, helped by feeding it well with 400kg/ha Urea through the season.

“LRPB Trojan was previously our main spring wheat, but with only an APW classification there was no premium available if we hit a higher grade.

“RockStar was easy to harvest and we were really pleased with its grain quality package and the marketing flexibility it offers as we can capitalise on the hard wheat market if premiums are available and we make the quality grade” Bruce said.

Last year the McLeans sowed RockStar at 88kg/ha in the second week of June, hoping for 600 heads per square metre. Despite being sown outside its ideal window, RockStar tillered well.

“It had excellent early vigour which is what we were looking for, particularly when sown later in the program, to help get through the winter period.

“Water logging and a sharp spring finish once we’ve grown a big bulky crop are the biggest challenges in this area. RockStar handled isolated water logging really well in 2021.

“RockStar was easy to manage, quite clean throughout the year and its strong disease profile allowed us to get through the season with only two fungicide sprays which really took the pressure off the spring spraying program,” Bruce said.

According to InterGrain’s South Australian Territory Manager, Josh Reichstein, RockStar provides growers with a variety ideally suited to sowing from late April to mid-May and is an excellent varietal complement within any wheat growing system,” he said.

“RockStar has consistently performed across a range of environments and sowing dates in growers’ paddocks and in National Variety Trials and our own InterGrain trials.

“It is the highest yielding mid-slow wheat in the early season NVT*, highlighting its broad yield adaptability,” Josh said.

RockStar is available through SA Seedclub Members and is a farmer-to-farmer trade approved variety. 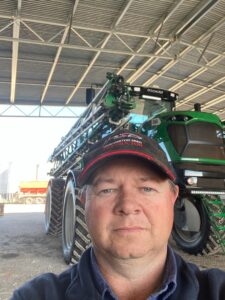